One Year On: Luton Tigers are Still Challenging Unfair Perceptions

One Year On: Luton Tigers are Still Challenging Unfair Perceptions

Last month, we had our first annual AGM. Our Chairman, Khalid Ali, left nobody in doubt about our vision. “Luton Tigers are a unique charity organisation created by the people of Luton, for the people of Luton,” he said in the opening speech of the event. “No matter who you are, as long as you lived and worked in Luton you are part of the Tigers.”

Shaz Zaman, CEO of the organisation, spoke to the same sentiment. He knows that his community is a hub of kindness and hope and unity. That’s because he grew up there, so he sees that every single day. What he doesn’t know, however, is why there are so many negative connotations of the place. That’s one of the reasons that he co-founded the community initiative.

“Luton has been tarred by extremism,” he says. “It is unfortunate we have a minority of people who have encouraged negativity in this town.” He then went on to list off what seemed like an endless ream of achievements that the club have seen since their inception just over one year ago. They’ve worked in two high schools, four primary schools, three sports clubs, a training centre and two voluntary organisations. Quite remarkable in our first year. 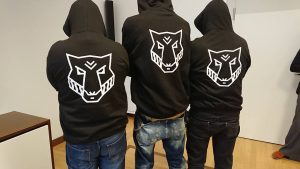 We’ve been working relentlessly to deliver 16 formal sessions and 13 sports sessions per week; we’ve reached 2,770 young people in education and training. The main aim for Luton Tigers is to inspire young people and to help them transform both themselves and the world around them. But another one is to reduce instances of radicalisation within the community. Yousiff Meah, Curriculum Director, talked about the work Luton Tigers does with the government safeguarding programme Prevent.

He shared his work on an online radicalisation course and announced that he is now working on a new course on sexual exploitation, written in collaboration with an ex-police officer. He feels it will both prevent and protect people from involvement in grooming gangs.

“In the future we want to make this town a better place,” Shaz said before he and a number of the other organisers of the AGM went around the town centre to hand food out to the homeless. “We want to deliver to every child in this town and work in more schools.” Well, it certainly looks like Luton Tigers are heading in that direction.